The Imagine Nation, or IN, is a team dedicated to enjoying online gaming. The team has boasted before the most posts, views, and positive ratings of all threads on the Lego Message Boards. The Imagine Nation has had over 50 members. When Lego Universe closed the team moved to Minecraft and now communicates via their site

Their mission is to be a fun experience for all its members wherever they are.

Imagineman was accepted into the beta phase of Lego Universe in June. However, he joined the Force of Doom at first. When Beta closed, the FoD soon fell apart. When Lego Universe was in its live 1 stage, ImagineMan bought the game in November. However, he joined Nexus Delta, worrying that being a leader of a team would be too large a responsibility. Being in Asia, he could not go to any meetings. This is when ImagineMan founded the Imagine Nation, a new team to have its purpose be fun, not going to meetings or strictly roleplay, but doing whatever the team wanted and making all time zones in the world have a chance to enjoy the fun.

At first the team recieved little notice on the Lego Message Boards. But RKRED5, ImagineMan's Lego Messageboards' username, constantly posting on what the team would do and fun features that were being added. Because of this and probably because all the posting kept the topic from being "buried", the Team soon gained popularity. As stated above, the team soon grew to the largest message boards team topic and was able to interact with some of the 'big teams.'

In LU, the team enjoyed massive wealth. With the ranking system, donating rares or money would quickly rank you up. Many members donated constantly in LU until ImagineMan, the IN Vault holder, once had millions of coins and his entire valut, maximized with space, completely full with Red Parrots to Turtle Packs to Dragon Helm MKIII's. With over 100's of the most rare objects in the Universe, ImagineMan was able to give these rares to members who couldn't get them. This was part of the system, were being a member meant you could recieve rares and those who gave the rewards got ranked up and were honored highly.

In November, during the Imagine Nation's anniversary, Lego Universe was declared it would close its servers for good in January. Many of the IN members were sad and also angry at the news. Many teams such as OFF and SKIS began to disband since the teams had nowhere to go after LU. However, ImagineMan told everyone to go to the Imagine Nation site. Not everyone got the news and some said they couldn't go to the site. On January 31, 2012, ImagineMan said his goodbyes to his friends in Lego Universe but encouraged them that a new era would be born.

When LU closed, the first order of business was what game to migrate to. Eventually the team agreed to go to Minecraft. ImagineMan contacted Sacha who already had some expertise in Minecraft since he had started playing the game even before LU was declared to close. Sacha then created a server for the Imagine Nation. Now the Imagine Nation has multiple worlds in Minecraft and has many great plans, such as an story.

The IN Wiki emblem 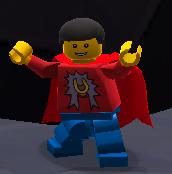 A picture of ImagineMan, the leader and founder of IN
Add a photo to this gallery
Retrieved from "https://lufanon.fandom.com/wiki/The_Imagine_Nation?oldid=6579"
Community content is available under CC-BY-SA unless otherwise noted.