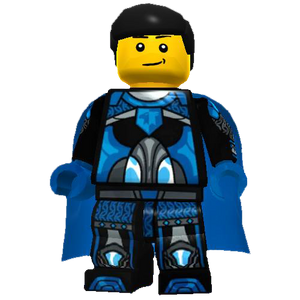 maestro35 is a former LEGO Universe player, also known as "ShermanTheMythran" on various sites. He was a prominent level 45 full-clad Sentinel, most commonly seen in Black Knight Breastplate, Leggings, and Greatsword accompanied by a Sapphire Scepter and Valiant Knight's cape, along with an Iron Barbute if in battle. He joined LEGO Universe on October 28, 2010, and with the exception of spring 2011, played all the way until the last minute on January 30, 2012. He is currently very anxious to have the game brought back somehow, be it by his hand or another's. His favorite world was Crux Prime, though he had a fondness for each world to various extents. He is full of ideas for what a future or resurrected LEGO Universe may bring, including a racing hub world, a LEGO Universe-style (not classic LEGO style) knights' world, and an isolated icy world based off of the original concepts for Crux Prime. He also has many ideas for gameplay improvements, such as guilds, rocket gameplay, and a whole new crafting system, among others.
Retrieved from "https://lufanon.fandom.com/wiki/Maestro35?oldid=5912"
Community content is available under CC-BY-SA unless otherwise noted.