GreatArmoredLemon is a level 41 Assembly, who joined Lego Universe in late June 2011. He is a full rank 3 Engineer, Summoner, and Inventor with all Assembly valiants. He only has one Valiant Cape(Summoner).He has full Batlord,Bone Suit,Mosaic Jester, and Bot Gear. Also, he has many other rares. He ran out of membership and ended on DEC. 23rd, but reappeared in January with free membership provided by LEGO.

-P.S.S Due to LU ending I'll be playing on Roblox. My Name on Roblox is ArmoredLemon if you want to meet in-game. 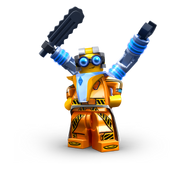 Add a photo to this gallery
Retrieved from "https://lufanon.fandom.com/wiki/GreatArmoredLemon?oldid=6069"
Community content is available under CC-BY-SA unless otherwise noted.